Merry birthday to me! I hope all my little bits of confetti littering the streets are OK?

I’ve been trying to settle on a creative project which is purely for fun for a while now, and finally my friend Steve and I have settled on DADAkitten. I can only explain it as ‘imagine if David Lynch did comedy sketches. Sort of. Not quite, but a bit. Also Welcome To Night Vale.’ Follow our channel for more delights and daftness.

Anyway here are a couple of mine, from a series called The Drama Farmer which relates YouTube drama on people who don’t exist:

And here’s my favourite one of Steve’s:

Sitcoms can be quite odd. Often a vacuum of humour, they’re mostly born of a Network’s desire to keep things inoffensive and entertain the whole family, dulling any creativity on the way (Big Bang Theory and Citizen Kahn, I’m looking at you). Sometimes they break free and become something great, for example Nathan Barley, Silicon Valley, Spaced, The League of Gentlemen, Fleabag, The Mighty Boosh and Atlanta (technically a comedy drama but I highly recommend it, particularly the BET episode. My stomach hurt during that).

Most of the time, though, sitcoms are just the same old thing in different settings, cobbling ideas together from already successful shows during a very desperate board meeting. Sometimes they have an original idea, but it’s so outlandish that you can’t quite believe was pitched let alone accepted.

Tom Hanks’ first screen appearance seems to be inspired by Some Like It Hot only more stupid and less funny. Some Like It Hot had to be in black and white for audiences to accept Tony Curtis and Jack Lemon as women, but the Bosom Buddies creators thought nah, it’ll be fine.

Tom and his chum find a cheap apartment to rent but oh, curses, it’s a hotel for women. Did…did those exist in the 1980s?

My Mother, The Car

Wanting to capitalise on the success of fantasy sitcoms like Mr Ed and Bewitched, with a little oedipal complex thrown in, the reviews for the sitcom in which a man’s dead mother is reincarnated as a 1928 Porter were so bad that it wasn’t picked up for a second series. I suggest you watch The Simpsons parody Lovematic Grandpa instead.

I had to include this. Generally a regular, unfunny situational comedy, it took a dark turn when the writers decided to highlight the dangers of paedophiles.

While I think it was well meaning and may have done some real good, the story slips down a rabbit hole of inappropriate laugh tracks and wise cracks while the action onscreen grows ever more disturbing. If you’ve ever watched the Butter’s Very Own Episode of South Park you’ll know what I mean, only this was unintentional.

“She weighs just 90 pounds and…and…when the wind is strong it catches that funny hat they wear, and off she goes!”

“Tere, your mother and I are very worried about you.”

The orangutan from Any Which Way But Loose landed a speaking role in this short-running sitcom. Apparently transformed into a genius after drinking an “experimental mixture” (pesky stuff) he becomes a political adviser (?) while his assistant and secretary try to keep his ape identity a secret. Yes, I’m sure it was hilarious.

Hitler and Eva Braun live in an apartment next to a Jewish couple in this British parody of American 50s sitcoms which aired for a single episode. I suggest you read this review of the shockingly unfunny programme here. Don’t say I didn’t warn you.

P.S. The writing at the start is fiction.

It’s probably no secret by now that I love YouTube, I watch it more than TV. So many artistic and weird things can be found that would never previously have seen the light of day outside of a few old tapes passed from hand to hand.

So I thought I’d share with you some channels entirely devoted to bizarre, freakish or otherwise surreal animations, the kind that shows you the real odd side of YouTube. I’m guessing most people know of Cyriak, David Firth and Rachel Maclean so I picked the smaller ones lurking below the surface.

Also, last night, my boyfriend Bill uploaded the trailer to an upcoming animation of his. It’s brilliantly absurdist and dark, I’m very proud of him, and I can’t wait for you to see the whole thing.

OK, first up is Colin Raff. All his animations are roughly a minute long and they’re a little Max Ernst, a little Monty Python, and very peculiar.

Next up is someone whose blog I’ve been visiting on and off for a few months, and recently discovered their YouTube channel. They’re videos are mainly surreal landscapes with jolly music, or a clip of a road or beach with some kind of animated layer on the top.

Gmcfosho hasn’t uploaded anything for a few years but his parody rap videos make me chuckle. With lyrics like “Fresh up out the water like a amphibian, I’m so fresh that I got a Aunt Vivian,” and rudimentary animations he’s entertainingly daft.

ProudNothing sometimes likes to throw a bit of humour and social commentary into his mind melting weirdness.

Wendy Vainity, or madcatlady, says “I am just a hobby animation software user using ready made content, just having fun on my computer and sharing.” Thanks, Wendy!

Hello! I’ve got book writer author type events happening this year and, if possible, it would be wonderful to see you there. If you’re American I’ll be in Portland, Oregon, this November for an event that all weirdo writers should take part in. Have a look below at the fantastical things.

May 14th, Brighton, Made Cafe

As part of the Brighton Fringe I’ll be reading from my new novella (OUT NOW!) 4 Rooms In A Semi-Detached House (Strange House Books). Meet me downstairs in Made Cafe. 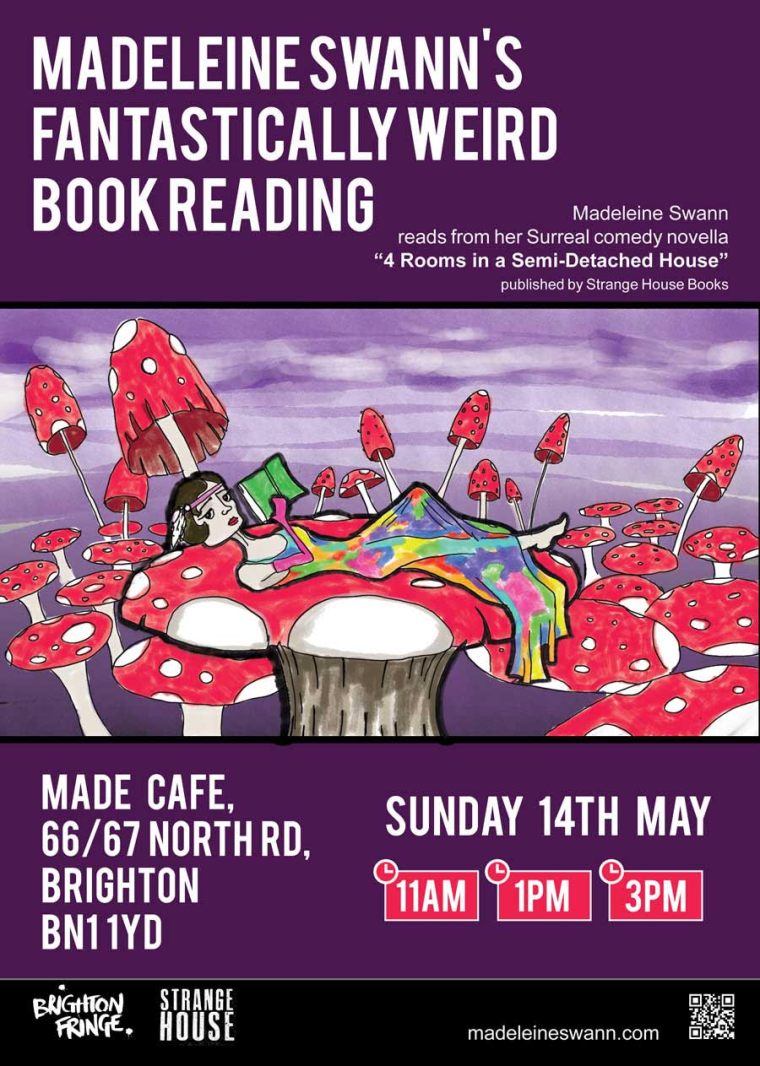 American author Laura Lee Bahr is hosting an evening of interviews and readings at The Big Green Book Shop in London. It’s been on the BBC, don’t you know? We may be joined by writer Adam Lowe but, as yet, we’re not sure. 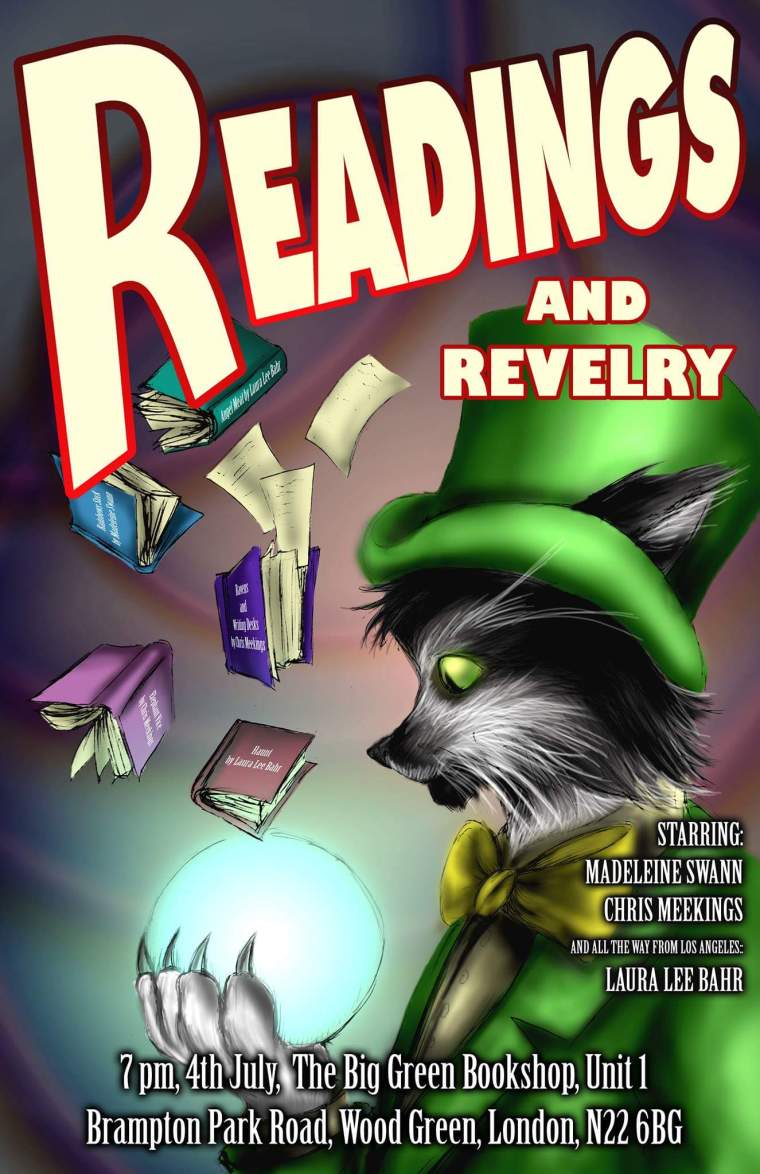 And, finally, I shall be attending Bizarrocon mid November in Portland, Oregon, for a week of workshops and readings. If anyone is able to attend I shall see you there, but if not I’ll regale you with tales of the Lovecraft bar and other wondrous things. To find out more nearer the time follow blog bizarrocentral, or the specially dedicated site Bizarrocon.

Merry holidays one and all! I’m going to take two weeks off after today but, never fear, I shall leave you with the wonderful words of some of my favourite writers.

Lately I’ve been doing a series of story readings called The Onesie Tales in which I read whilst wearing full length pajamas and no make up. There’s no massive reasoning behind this other than my pajamas are very comfortable and I’m quite lazy. I’ll be continuing this in the New Year so if you’d like to join me subscribe to my youtube channel to be notified of the next one.

P.S. The ending of the first video is very embarrassing. I didn’t realise I was still recording and I talk in a silly voice to my boyfriend Bill and look for my glasses like a drunk aunt at Christmas.

Bonjour! I’m in the final throes of the second edit of my novella, thus I don’t have long to spend with you. However I wouldn’t want to leave you empty handed so here is an animation by Ben Wheele.

It’s beautiful, with Georgian overtones, but also rather dark so only watch it if you like dark things.

My tiny (10,000 word) surreal, bizarro, weird and any other adjective erotica novelette was released today with New Kink. Sometimes I get the urge to write rude things and, being me, they end up just as odd as the usual stuff.

P.S. My artistic partner in crime and cuddles Bill Purnell did the front cover, he’s a very clever pickle. 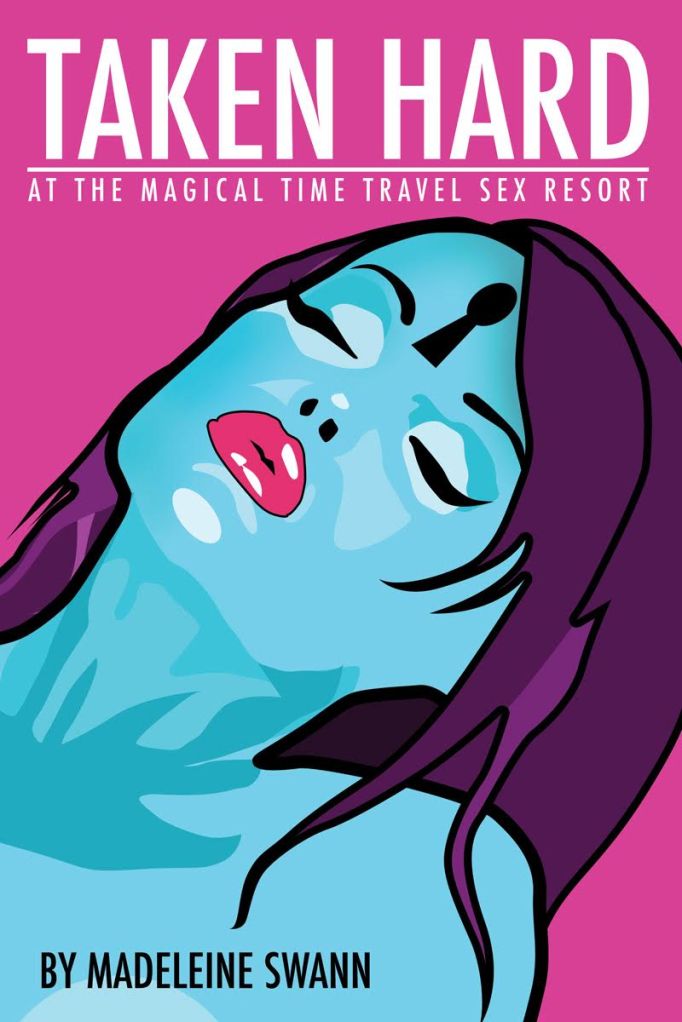 Before you get too excited, let’s give this video a shot. The beloved Sauda Namir reads an excerpt for us in a series called Bizarro Bedtime.

With a gorgeous cover from artist Bill Purnell, and a lot of kink packed in a small package, let’s see what she’s about.

Each story follows a woman from a different era who recieves a mysterious card inviting them to the Gardens, including Sam, a modern Western woman in a failing relationship; Aysun, a member of a Sultan’s harem and Itzel, a Mayan princess. Overseen by their mysterious guide Rex, a rainbow half-man half-bird, they experience all the strange and wonderful things the resort has to offer from vagina seats in the park to a sensory depriving tube.

But it can’t be sunshine and orgasms for everybody, and the Garden needs payment…”

Why not send yours? Follow the link to find out how.

Well hello there. Sometimes I write rude things because…well, why not? And, because I have a weird brain, that’s just how they turn out.

I hope you’ve been having wonderful, liberated fun out in the corn fields of happiness. Now that summer is approaching it’s time to think about cool clothes and ice cream. However, I don’t think you’ve seen adverts like this before, though it definitely made me want ice cream.

This company’s web ads have introduced a kind of Welcome To Night Vale horrific nightmare surrealist poetry to their frozen products and I urge you to watch them all. Because I love you I’ve also added the making of and frequently asked questions at the end. Ta dah!

This Is A Special Time:

Check Out Our New Package: