Merry holidays one and all! I’m going to take two weeks off after today but, never fear, I shall leave you with the wonderful words of some of my favourite writers.

Lately I’ve been doing a series of story readings called The Onesie Tales in which I read whilst wearing full length pajamas and no make up. There’s no massive reasoning behind this other than my pajamas are very comfortable and I’m quite lazy. I’ll be continuing this in the New Year so if you’d like to join me subscribe to my youtube channel to be notified of the next one.

P.S. The ending of the first video is very embarrassing. I didn’t realise I was still recording and I talk in a silly voice to my boyfriend Bill and look for my glasses like a drunk aunt at Christmas.

Hello my little dustpan brushes sprinkled with attractive gems. Recently I read Surrealist Women: An International Anthology. The kindle version is slightly cheaper than the hard 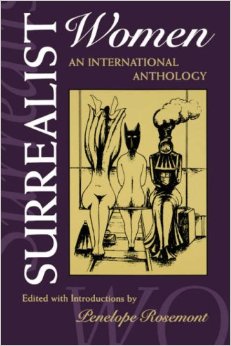 copies but still costs a whopping thirty pounds. I do think it’s worth saving up for, however, as it is an almost exhaustive encyclopedia of all females involved in the art movement from the twenties to sixties counter-culture to now, including examples of their work.

The essays at the beginning of each new era, separated into chapters, refutes the idea that women were not as involved as men. While they were not seen as full members during the twenties they were just as passionate, and only a decade later their participation exploded. It only seems to be outside critics and scholars who have omitted them since.

This passage offers an explanation for the reticence at the start (Andre Breton’s wife, Simone Kahn, wrote several letters to her cousin Denise Levy in the early years): “Although masculine egotism surely existed in the Surrealist Group, what is known of Kahn’s correspondence refutes the temptingly simple but shallow argument that the relatively small production of the first women surrealists can be blamed on male chauvinism alone. What held these women back, more than likely, was a complex of inhibitions and fears inherited from centuries of French and European patriarchal, capitalist, Christian culture; notions of “feminine reserve,” “woman’s place,” and “biological destiny” that they had internalized more or less unconsciously as children and which continued to wreak havoc in their psyches in later years, despite themselves.”
The author mentions other biographies of individuals but Surrealist Women is packed with primary research and any omissions of a particular writer/artist’s contribution to surrealism is addressed. She also looks at surprising aspects of surrealism, such as it’s affinities with Trotsky and other leftist leaders as well as feminism. In the early thirties the wall street crash brought a tide of woman-hating against those who ‘stole the jobs of men.’ Two high profile murder cases took place in France during that time, the Papin sisters – maids who killed their bosses – and Violette Noizierre. Both were reported vitriolically by the press as examples of women running amok, but apparently the Surrealists were one of only a few groups to point out that all women involved were being abused and possibly acted in self-defense.
I discovered several writers and artists I had never heard of as well as learning more about others. As a huge fan of Anais Nin I was excited to discover Nelly Kaplan who, under the name Belen, wrote “erotic tales of black humor.” She is also a filmmaker, one of her best known being A Very Curious Girl (1967).
There was also Suzanne Cesaire, born in Martinique. Though her husband, Aime, often overshadowed her, she was very active and started the magazine ‘Tropiques’ with him. There’s Joyce Mansour, the best known Surrealist female poet once told by Breton himself “Your gift is that of a genius,” and Rikki Ducornet, artist as well as author, who has illustrated books by Jorge Luis Borges among others.
I enjoyed it and learned a lot, and now have plenty of further reading and art to explore, as will you.
Below is a short documentary about Leonora Carrington, also featured in the book. Incidentally one of her stories is in The Weird: A Compendium of Strange and Dark Stories, another I highly recommend.

Hello! The other day my blog was nominated for a Liebster award. I may not have known what it was but I was very pleased as it made me sound intellectual, thus I purchased a pipe, a smoking jacket and crisps.

In actual fact it’s awarded to blogs with less than 3,000 subscribers. I must answer eleven questions given to me by Angela D’Onofrio and nominate 5-11 other bloggers, giving them 11 questions to answer which are at the bottom of this post (and they must then do the same). Here goes!

There we have it! My nominees to answer the questions below are:

The Year of Halloween

And my questions for you are:

Just a little article I did for the site mookychick. I have a look at the various ways famous female artistic types got inspired. Off you pop!

Today’s book pictures (me posing and pretending to read) are brought to you by The Glass House Tea Shop in Braintree, Essex. They gave my friend and I a small slice of free cake, which was wonderful by the way.

Phew it’s all happening in this one! Let’s begin.

1. Cannibals of Candyland by Carlton Mellick III. A good, fun read which doesn’t take too long as it’s quite short. A race of cannibals exists in a magic land under the city. The main character searches them out in revenge for leading his siblings away years ago with a hypnotic sweet scent, but things don’t go according to plan.

2. The Weird: A Compendium of Strange and Dark Stories edited by Ann and Jeff Vandermeer. I’ve mentioned this book once before but I love it so much I’m mentioning it again. It has almost everyone you can think of: Neil Gaiman, Haruki Murakami, the short story of Don’t Look Now by Daphne Du Maurier, George R.R. Martin (wrote some books about thrones and games, I dunno), Franz Kafka, Clive Barker, Robert Aickman, Leonora Carrington (Max Ernst’s extra marital partner and a surreal painter and writer) and Saki, to name a few. Everyone should read more Saki, he was a genius. Basically, buy this book now or I’ll creep into your room at night and sniff your ear.

3. Bust Down the Door and Eat All the Chickens edited by ? I could be incorrect but I believe there were ten of these short story issues gathered before they stopped. Perhaps they’ve moved to a new home (though they’ve left no explanation) or perhaps they vanished into a puff of kittens, either way have a look at the archive editions for a dose of true insanity.

Here’s what wikipedia says: Apocalypse Culture is a collection of articles, interviews, and documents that explore the various marginal aspects of culture. It explores aesthetic nihilism, destructive cults, extreme violence, sexual deviancy, conspiracy theory, extreme forms of nationalism, and other subjects. First published in 1987, it was reprinted in 1990 and 2001. In 2000 the sequel Apocalypse Culture II was released. The book has been widely campaigned against and has been banned in many countries.

Very well, thus concludes another session of Bizarre Book Club. May you not run weeping into the night. Or perhaps may you, depending on preferences. I’m not here to judge. Toodle pip!

Merry Spring! Tis the time for daffodils, blue skies and wildly raging hormones. But wait, get that poor nude fellow down from the Wicker Man, you can burn him later. First on the agenda is a new pile of extremely odd books.

1. The Hearing Trumpet by Leonora Carrington. One of the surrealist crowd and lover of Max Ernst, Leonora’s life seems as bizarre as any of her work. The book itself is intriguing and oddly refreshing – the main characters are all women in their 90s, an age group usually included in fiction to generate sympathy or to hilariously utter a swear word at the wrong moment. However these are real characters featured among the increasingly bizarre carryings on.

2. People With Holes by Heather Fowler.  The nominal first story in this collection made my brain crackle, which is my way of saying I found the thoughts it induced exciting. I will say there were perhaps one too many ‘people turning into animal’ stories but that’s my own opinion obviously, and there are plenty of other varieties of story. For any fans of magic realism or anything a bit different this is for you, and the way she writes pulled me right in.

3. A Million Versions of Right by Matthew Revert. Definitely an odd’un, this is also very funny. If your mind can take the battering from this surreal short story collection (one character’s job is to insult walls) I promise you chuckles a plenty.

4. Haunted Air: ‘A Collection of Anonymous Hallowe’en Photographs America c. 1875 – 1955‘ by Ossian Brown. Haunting, weird, fascinating and a little disturbing, this is literally a bunch of photos from various sources on Halloween, and yet it’s much more than that. Who are they? What did they do just seconds afterwards? With photos reminiscent of Diane Arbus, needless to say the foreword is by David Lynch.

Well, there we are! A few books to be going on with until next time. In the meantime here is a post about some lovely pornographic actresses, including that nice Stoya Doll, reading poetry and prose aloud. NSFW, kind of.