Today’s pretentious book picture is brought to you by The Mad Hatter’s Tea Room in Southend. May you also stare intellectually into space whilst sampling their seriously amazing cakes. Honestly, I mean it, go.

Alice in Wonderland has meant different things to me at different times, much like it has throughout history. When I first read it as a child I hated it, it ‘didn’t make any sense.’ Slowly I was drawn back in and I remember my excitement when I realised my imagination was free – cue many stories in Primary school where the teachers probably thought I’d had some sort of breakdown but were afraid to ask.

Then, of course, I re-read it as a student, this time aware of Carroll’s possible opium use (not unusual for the time, it was sold freely in shops) and the links to psychedelia owing to homages such as this:

Incidentally model/Warholite Edie Sedgwick was keen to make an underground film version in the mid sixties but sadly it was not to be. 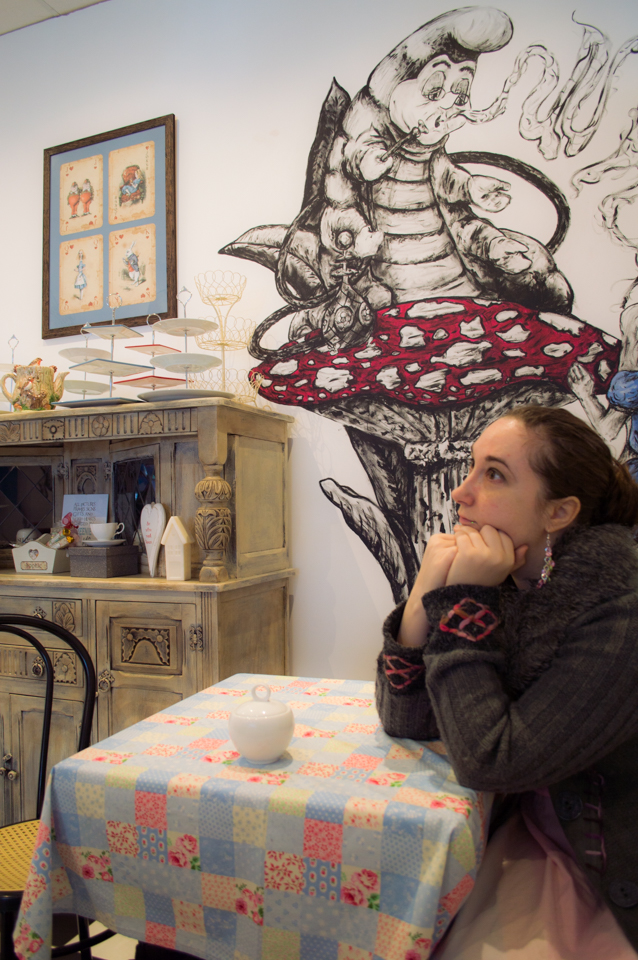 Recently I entered Wonderland once again, this time with all kinds of knowledge (though not as much as I’ll have in the future). I’m aware now of the possibly disturbing relationship between Lewis Carroll and the real Alice (see the documentary below, also featuring writer Will Self among others).

However I’m also aware that it unlocked fantastical and unrestrained worlds in my own brain and doubtless did for many other creative types. The pace is quick, the dialogue fun and the characters iconic. I’d like to see a new film version of the original story done well, but for now I’m perfectly happy using my own imagination when reading the weird words of Carroll.

Documentary The Secret World of Lewis Carroll. Keep watching to see the eerie discovery towards the end: