Where can you make things out of clay, or sew your own toy, watch a two person short play and a monologue about the Marquis De Sade before toddling off to the Cabaret tent to watch burlesque? The Chelmsford Fling in Essex, that’s where! Have a look online here. And the best part? No children!

In the cabaret tent Desmond O Connor (who’s popped up as MC for Bizarre Magazine’s Ball more than once) serenaded us with increasingly rude songs on the ukelele and Ginger Blush engaged the crowds in burlesque bingo (like normal bingo but with corsets), all punctuated with lovely ladies dancing about and removing items of clothing. Oh, and one man, he was quite nice too.

Elsewhere in the Make Do And Mend tent you could create your own toy, or watch two professional actors in a short play in the Storytime tent. If that’s not enough you can make things out of clay or your own hat if you don’t mind looking really stupid, or watch experimental films whilst drinking refreshing smoothies in the Psychedelic Film tent. Oh yeah, and somewhere there was some live music playing.

Obviously it’s already happened this year, but make sure you get to the next if you can and buy advance tickets as the price goes up considerably on the door. Now here are some pictures to highlight the experience:

These unusual photos from times past are sure to entertain your eyeballs. Reblogged from emorfs.com, I promise they won’t disappoint. Have a look! 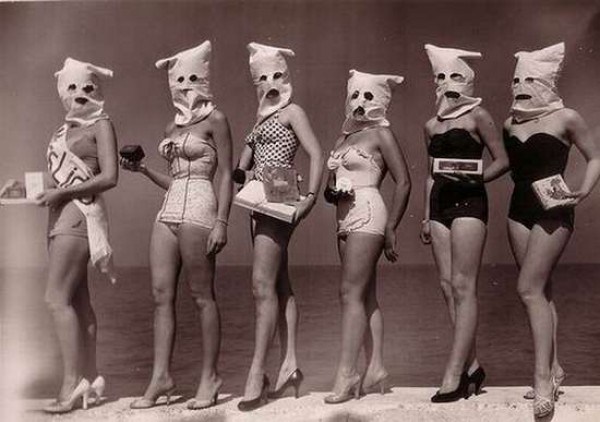 Pull up a chair and enjoy my latest intallment of articles for ladies with alternative interests on mookychick.co.uk. That’s alternative as in vintage/burlesque/subculture etc, not Adult Babies.

Or I suppose an adult baby could read it, I’m not saying they’re not allowed. Oh dear. Enjoy! 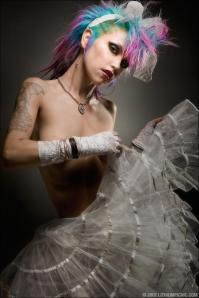 I watched a rather peculiar documentary today called Party Monster, The Shockumentary. It’s quite a deliberately bad taste film about the Club Kids in late 80s New York – young people who dressed outlandishly and included fashion designer James St. James– and their party organiser Michael Alig who ended up murdering someone and putting the chopped up body in a trunk. Obviously it got me thinking about fashion. And murder I suppose but that’s no change.

I love art from Francis Bacon to Lempicka to photographers of the unusual like Diane Arbus, but I also love fashion. The outfits at the Bizarre Magazine Ball for example are truly bizarre and great, so here I shall include some of the things that make me weep with joy and perhaps you will find something of interest.

Most people complain that catwalks are full of designs people would never wear in the street, but to be honest that’s the thing I enjoy seeing, mainstream or underground. Regular fashion bores me but anything a bit fantastical, gothic, odd or grunge I love.

First off I have to include my favourite online shop, Joe Brown’s, as its something people will actually be able to afford. There’s some regular stuff but look around, you’ll be very pleasantly surprised.

Newish designer Jared Gold’s gothic and historical clothes are great, they have a similar Alice in Wonderland feel to Bill Gibb.

Tokyo is known for its ‘avant garde’ fashion and I’d love to go there. I particularly like the punk and Gothic Lolita styles.

Keeping in the fantastical realm I definitely recommend looking out for alternative models/designers out there such as Ophelia Overdose and Audrey Kitching. Also have a look at Bizarre magazine’s alternative model website Ultra Vixens for more ladies of the odd and artistic variety, or become one of them if you like. Plus Spitalfields market in London is host to the annual Alternative Fashion Week (presented by Alternative Arts), 16-21st April. Exciting! Colourful! Imaginative!

I have a book I love containing alt glamour/pin up pictures (piercings, tattoos etc) taken by Octavio Winkytiki and Lithium Picnic  (my favourite). They’re pretty and unusual, but be warned, some of the content on their sites is not for children’s eyes.

My good friend Emma Bailey is a photographer in Brighton and has done a number of burlesque shoots. Burlesque is fun, the women often have normal sized bodies and I love vintage glamour. Fancy Chance is very funny to watch live and Banbury Cross is lovely too.

I like how bananas high fashion can be, including the designs of Alexander Mcqueen and the photos of Tim Walker. Feast your face!

I’m not hugely a fan of Andy Warhol but I love some of the Factory types like the Velvet Underground, and there was something very interesting about his model Edie Sedgwick.

She had a fascinating life, one well worth reading more about.

I’m also drawn to the pictures of a model known as Scar, they’re creative and apparently she makes headresses too, which is nice. Another artistic model is Allison Harvard, who reminds me of a Tim Burton character, and gothic model Apnea is jolly too.

Finally, I know it’s such a cliche that a person who likes Neil Gaiman and alternative models such as the Suicide Girls would also like the outfits in Tim Burton films but I do, so there. I’m not a goth but Alice in Wonderland and the White Queen had me searching for my dark lipstick, as did Lilly Cole in Terry Gilliam’s Imaginarium of Doctor Parnassus.

Below is a short ‘documentary’ of Edie Sedgwick:

Ever wanted to see your friend hung up by hooks? Chances are the answer is no, and that’s the answer I would previously have given too. However that’s what happened, and it was done in the name of entertainment. I was living in Bournemouth at the time, though I still have no idea how I ended up there. I spent the summer of 2005 sitting on Bournemouth beach watching the locals fry themselves. It was supernaturally hot. It was on one of these days that my friend Matty mentioned he was going to a suspension party. Matty towered above me, had a long beard and the biggest blonde dreadlocks I’d ever seen. He was also one of the sweetest people I’d met. 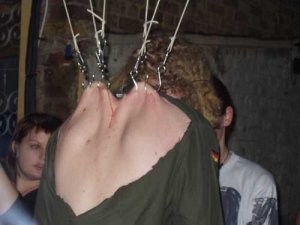 At first I didn’t know what he meant, I’d never heard of a ‘suspension party.’ He was insistent I come along and through his Liverpool accent (Widness, he insists,) he convinced me. “Ok,” I thought, “It’s something I haven’t done before.”

We trekked across dry, sandy roads in the flaming sun. After wandering for miles we arrived at a hidden, quiet sandy beach. It was the closest I’d come to a private paradise. “Coolio, we’re here” said Matty. Next to the beach was one of the biggest houses I had ever seen with a garden reminiscent of a small festival space, filled with the type you often find at certain festivals; dreadlocks, brightly dyed hair and lots of piercings. The sun had put everyone in a good mood, and I was made to feel very welcome.

The thing that really caught my attention was the focal point of the party, a large bandstand at one end of the garden. Hooks hung from long chains that dangled from the ceiling. I was unsure of my own reaction as I watched a girl hang in mid-air, hooks piercing the flesh along her back and legs as she faced downwards.

As I found a place amongst a group of people I vaguely knew, I wondered at the reason behind all of this. It seemed a lot of effort in the name of fun and there had to be more to it than that. I watched various people strung up in a variety of ways; some with hooks impaled into their shoulders as their legs dangled, some with hooks connected to another person, chest to chest, as they sat on the floor, and I began to ask questions. “It’s like a kind of euphoria, a kind of peaceful feeling,” said one pink haired girl in a fairy dress.

Her dreadlocked boyfriend nodded in agreement. “It’s like a drug, or better.”

Apparently it releases huge amounts of endorphins, creating a sense of overwhelming happiness. I was reminded of holy people in India who apparently place themselves into a trance so as not to feel pain. 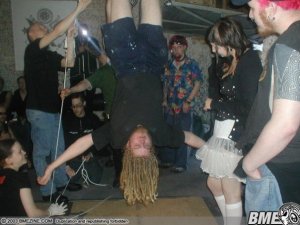 One pair of girls stood out in my memory quite vividly. They were dressed in traditional goth uniform, one in a short black dress and the other in purple, both with long dark hair and eyeliner. There seemed something ethereal about them, but perhaps the intensity of the afternoon was getting to me. They knelt on the floor of the stand facing each other, a shaven headed piercer in black attaching hooks to their chests as they grimaced slightly in pain. They stared at each other so intently it was as if they had gone into a trance. A chain connected them together. A girl with long brown hair sitting near me whispered, “They were best friends, but then she slept with her boyfriend. They thought doing this might make things better between them.” It seems they were using an extreme shared experience to resolve an issue, but I wondered whether it would truly eliminate a grudge. When it was over they seemed relieved, happy and close again.

The only time I felt vaguely uncomfortable was when one girl, covered in tattoos, was suspended by her shoulders. She had never done it before and I felt her nerves. Perhaps it was my brain’s way of protecting me but it almost felt like I was looking at the TV, that the images before me weren’t quite real, and I didn’t find it as shocking as I had expected to. I actually quite enjoyed myself, because everyone else was having so much fun.

That is, until Matty went up. It had grown dark by this point though it was still very warm. The piercer (apparently an expert called Sarge from tattoo shop Metal Fatigue) attached metal claws through his knees and I began to squirm. I turned to face the other onlookers, who seemed at peace with the situation, but the urge to pull the hooks off was strong. “This is his choice,” I told myself. Later, I was intrigued that I was at ease with others doing it but uncomfortable when it was a friend.

He was suspended, knee first, up into the air. His arms, T-shirt and hair dangled downwards. Of course, there were no problems, but my sense of relief when it was over was incredible. Myself and another friend were invited to massage the air out of Matty’s knees. I’ll be honest; despite having had several piercings before I’ve never been very good with blood. However, like a good friend I trudged across the garden to a room behind the stand.

Matty lay on a surgical table as a man explained what we had to do. He handed us gloves and I complied, but I really think I went into shock. Matty was grinning like a crazy man and was in a very good mood. I forced myself to press down on his knees and push towards the holes. I could clearly hear snap, crackle and pops like rice krispies as the air escaped. I know how white my face went because I was asked repeatedly if I was alright. 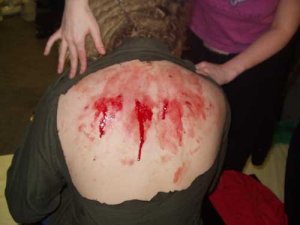 With the evidence of the hooks and blood gone, I could relax. My friend was back to normal, whatever that may be, and the night was again about watching people I didn’t know doing something they enjoyed. It may not be my cup of tea, but I’m glad I went.

If you’re interested to know more, the BME (Body Modification Ezine) site is an online community full of vital info and crazy pics.