I found these articles I wrote back in the mists of time (2007) and thought they were sufficiently entertaining enough to include.

I go into further detail on how to write for magazines in this post here and in my blog Swann’s Shack on The Focus Project. As well as the articles below I’ve reviewed a freaky sideshow, interviewed and written about burlesque dancers, film-makers, tattooists, church renovators (yes, church renovators…for Essex Life) and new hip replacement technology (for a medical magazine…not Just 17).

Needless to say these were for Bizarre. I also collected the voodoo doll ingredients from Camden (I knew pink sparkly beads would look terrifying). Click on them twice to enlarge: 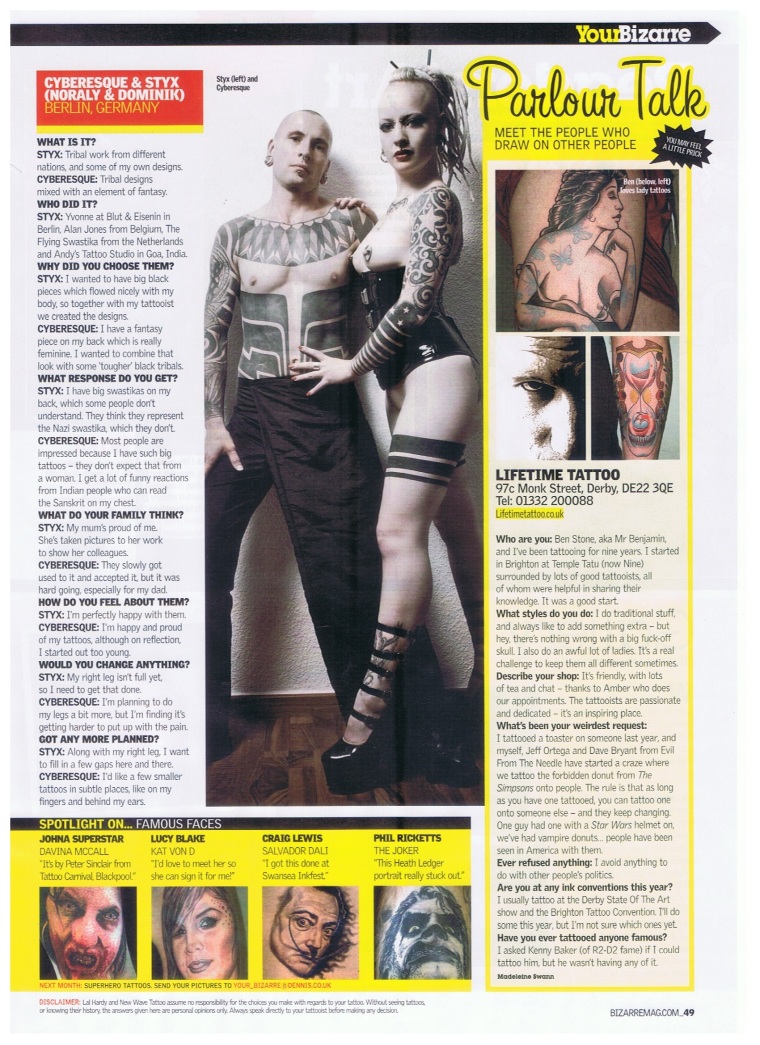 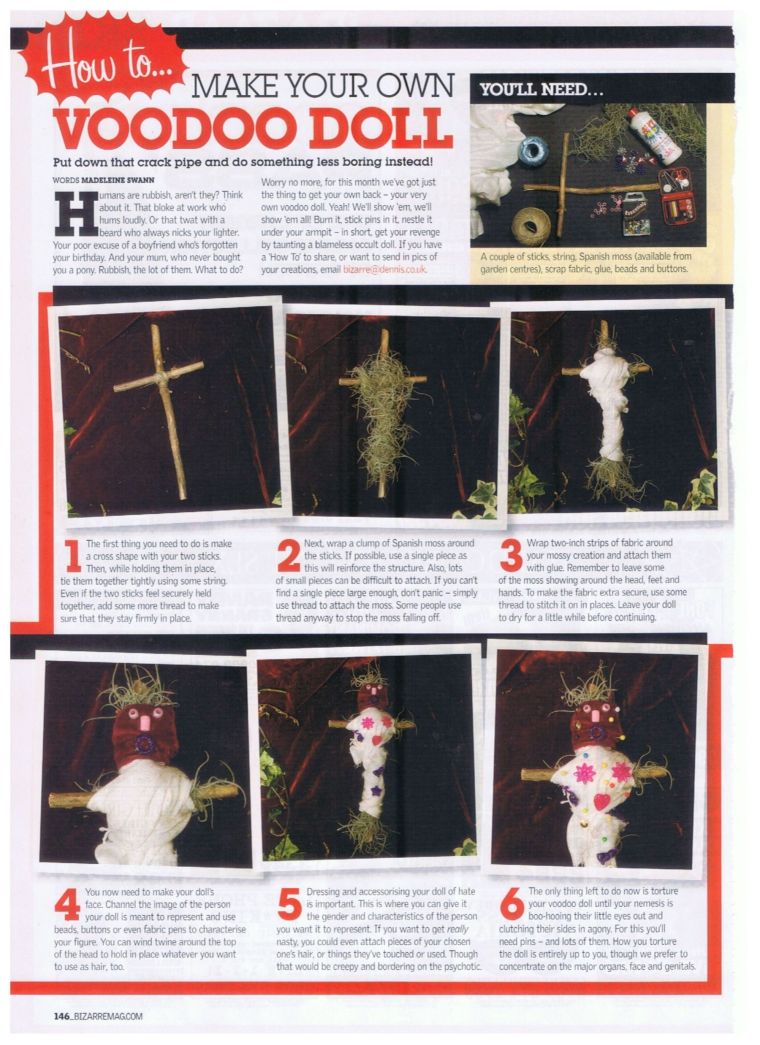 Want to be a magazine journalist? I did an internship at both Bizarre and Essex Life which has given me useful information to pass on, but I’m pretty sure you don’t want to know about the catalogue shoot for brown wellies I helped with or the article I wrote about Ladies What Lunch (I coined the term). No, you want to know about toe wrestling and making voodoo dolls.

The first thing you need to know about doing a Journalism course that will actually be helpful is that it needs to be accredited by the NCTJ, the National Certificate of Training for Journalists. Oddly enough the best place near me (Braintree, Essex) for this is Harlow College Journalism Centre. It’s got great teachers and facilities at a half decent cost, which was very surprising for a small town I’d never really been to.

During your time off at college you’re expected to contact a magazine (or newspaper, if that’s what you’re doing) and arrange a couple of weeks at least to go be their puppy. You’re probably missing out 100 per cent if you don’t. So, with my pathalogical love for the odd, I trotted along to Bizarre magazine after sending them an explanatory email. I thought about Fortean Times despite not actually believing in any of it but it’s literally just two people at a desk.

Each morning was spent checking over the new photos sent via the website to enter their ongoing alternative model competition Ultra Vixens. My eyes would drift to the stuffed animals on the shelf as I joined the staff around the large table. The room was filled with these tables, each belonging to the staff of a different Dennis Publishing magazine. It could become a problem when Monkey magazine next to us would play music wars, but mostly we all rubbed shoulders in piece like gentle Leviathans.

After adding the model’s pictures my duties included: typing up interviews (which included ‘psychic vampires,’ plus Neil Gaiman and Simon Drake in his House of Magic), going to Camden to find the ingredients for a voodoo doll photo shoot, interviewing Missy Macabre and conducting interviews at the Bizarre Ball, which I did two years running. As I wandered around Camden with my list of stuff for the doll on a warm spring afternoon, I vowed I would never again have a normal job. And I haven’t.

I got to do a surprising amount of writing while I was there, such as the step by step instructions on making a voodoo doll (turned out to be not so scary covered in pink glittery beads) and a review on a sideshow they sent me to one night on Brick Lane, The Fire Tusk Pain Proof Circus. I got to see comedy burlesque dancer Fancy Chance and glass eating Lucifire for free, which was very nice.

Being an intern is exhausting because you have to be constantly aware of things you could be doing to help or ways of suggesting ideas, plus you have to be open to very last minute suggestions of tasks eg, the afore-mentioned toe wrestle. The man’s toe was enormous. Half the time in the office I didn’t really know what I was doing.

So there we are, the life of an intern. The only thing you can count on is each day being drastically different. Good luck!

In the video below the lovely Alix Fox takes us sword swallowing: