Just over a month to Halloween!

If you’re creatively inclined with your hands (I’m really not, everything handy I try to do comes out looking a little depressed) maybe you can have a go at this insane horror illusion make up for Halloween. Some people make it look so easy, and SammyLovesFossas is one of those people.

The Last of Us:

Honestly there’s so much more, please visit her channel for more amazingness. See you soon!

The time approaches! That night where you invade someone’s house and move things around while they sleep so they wake up all confused and call the local papers and they come round and it all becomes a really famous case of haunting and you can’t admit it was you because it’s all gone too far so you have to just keep doing it.

To celebrate such a wondrous event I have searched the internet for tales of terror or humour to share with you all, because I’m like that.

I have no idea what’s going on in this UAE (United Arab Emirates) based film, but I quite liked the atmosphere. Cold Feet:

Funny and clever, this is a very entertaining five minutes. The Sleepover:

I wrote about the making of this film for a magazine and got to watch a scene being filmed (the doctor’s office). I also attended the wrap party where zombies carried trays of brightly coloured cakes. Annabelle’s Tea Party:

For an added bonus here’s a making of documentary:

There’s more than a touch of exam anxiety in this Korean tale. The Function:

This was shown as part of a series of shorts on channel 4 in the UK called Random Acts. It’s not strictly a horror but I think genre fans will definitely appreciate the humour. The Ting:

This mischievous short was based on a story called The Open Window by Saki. Read it if you haven’t yet. Certified:

The puppet masters have created another disturbing tale of kid’s songs and innards. Don’t Hug Me I’m Scared 5, Food:

I remember this Irish short from a film website in 2004 and it stuck with me. The Ten Steps:

This Mexican film has a surprise in store. Luna:

Among other things I like to write erotica, and it just so happens I have another tale out with Forbidden Fiction. I’m working on getting a collection together, so if you like that side of my writing there’s more to come.

This new story features a Victorian actress determined to be taken seriously. When she lands a part in The Grand Guignol she decides not to get involved with any of her co-stars, but that all changes on the opening night. 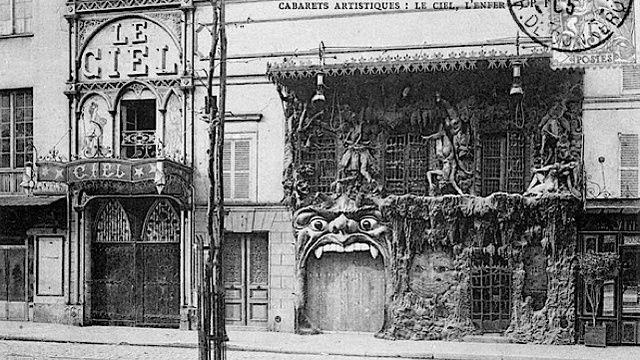 La Belle Epoch (or golden era, roughly 1871 to 1914) of Paris certainly enjoyed life on the dark side. Not only were gory horror plays performed for those looking for late night thrills, a person could chat about philosophy and the meaning of death over a coffin table.

The Grand Guignol was a style of theatre steeped in gore and fear that continued right up until 1962. Rich and poor alike would go to a performance and prepare to be terrified. Read more here.

The Heaven and Hell nightclubs were fantastically intricate drinking spots. The 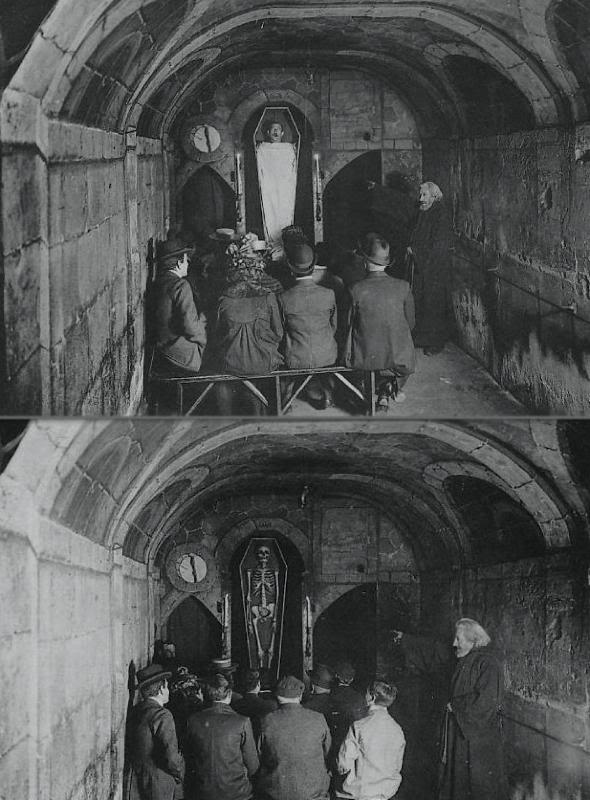 Cabaret of the Inferno was described thusly:

“Enter and be damned, the Evil One awaits you!” growled a chorus of rough voices as we hesitated before the scene confronting us. Near us was suspended a caldron over a fire, and hopping within it were half a dozen devil musicians, male and female, playing a selection from “Faust” on stringed instruments, while red imps stood by, prodding with red-hot irons those who lagged in their performance.”

After this spectacle patrons would visit the Cabaret of the Sky, a much more divine affair.

The club I find most intriguing, however, is the Cabaret of Nothingness:

“Large, heavy, wooden coffins, resting on biers, were ranged about the room in an order suggesting the recent happening of a frightful catastrophe. The walls were decorated with skulls and bones, skeletons in grotesque attitudes, battle-pictures, and guillotines in action. Death, carnage, assassination were the dominant note, set in black hangings and illuminated with mottoes on death.”

To read more about these fascinating clubs visit here.

Well, there we have it, much more interesting than Euro Disney don’t you think? 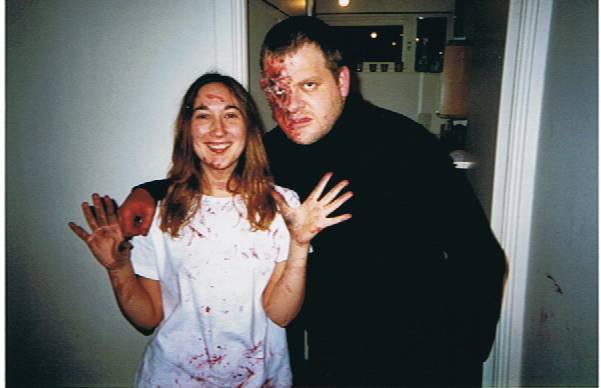 One weekend I decided to find out what it would be like to be strangled with my own intestines. I set off on my merry way at the end of October (almost Halloween, perfect) 2006 to Kent, where said strangulation was to take place. I caught the train in the afternoon to my dad’s place, as it was quite close by to my destination. I would stay at his whilst the proceedings took place.

At the time I belonged to several actor’s websites which informed me of projects. I had recently been given a part in a low budget feature length in which I would play one of several prostitutes, however I couldn’t help applying to one short film being shot on the same weekend. Blood? Gore? Horror? I would find a way to shoot both of them! It was a rushed production being made for a Halloween film competition, so I wasn’t expecting miracles. I had spoken with director/actor/producer/writer/cameraman Johan Krugar on the phone and the enthusiasm of the South African had rubbed off on me.

It was a cold, wet afternoon. I made a stop to see dad before heading on to my destination. We had a ritual which we have now broken, but whenever we’d see each other the first thing we’d always do was go for a pint. So, that’s what we did.

We ducked into a dark little local out of the rain and talked about the usual things; Futurama, films, comedy, what comic I was reading (yes, we are a pair of geeks). One pint turned into two, then three, and before I knew it I was finishing my fourth. And I had to go. I ran to the train station and hopped on the train to Bromley thinking: “God, it doesn’t get much more glamorous than this”. By the time I arrived at the station to be picked up by Johan, I realised I should probably not have turned up on my first day reeking of beer.

There was his red car and there was Johan; a stocky, cheery, soft spoken, slightly ginger man. In the back seat was his crew: a woman of about thirty, same as Johan himself, with short dark hair, and a bleached blonde, camp young man in his twenties. All were South African and very friendly. We arrived at their flat where the filming was to take place. I have noticed from going to lots of different towns for auditions that each town basically has the same layout; the same shops are in the same order, and each road turning feels familiar. Bromley was no exception.

My character began talking to a stranger on the internet. He causes increasing concern until he knocks at the door, murders her boyfriend and makes a beeline for her innards. As always a scene took far longer to shoot than expected and we were tired, eventually deciding to put off the rest of the filming until the next night.

The evening after I arrived at the station, wearing several jumpers after a day spent virtually nude in the freezing rain playing a prostitute.

With a serious film crew, the pressure would be incredible. Lots of cameras and eyes focused on you, willing you to get it right. Luckily, this was for fun, and the only blunt comments I had to listen to were Johan’s, and they were so hilarious I really didn’t mind. Example: “Maddie, you’re not a zombie. Why are you walking like one?”

The evening went well. By the time we arrived at the scene where I hesitantly stalk down the stairs armed only with a fork I was really having fun. The next night was Gore Night, however, and that would be the most enjoyable.

We had been joined again by the two others in the crew; the camp man playing the role of my boyfriend Johnny and the lighting girl.

We filmed my character nervously investigating the knocking from downstairs, armed with afore-mentioned fork. It’s her boyfriend. At that point his eyes glaze over, he cries out in pain and a hand reaches through his stomach from behind him. That’s what was meant to happen at least, but that one scene alone gave us enough footage to make an outtakes DVD, including the moment when he and the killer fell through the door on top of each other.

Eventually it was time for my death. I couldn’t wait. The fake blood was frothing and intestines wrapped inside a prosthetic stomach was placed over my own belly. My torso was covered in red goo. While the killer lurched threateningly towards me, Johan told me to stick the fork into the top of his mask.

Undeterred, he thrust his hand into my belly and I watched the long, bobbly purple innards inch their way out. They were wrapped around my neck tightly and I hammily performed my demise. I used to perform death scenes when I was a small child to the eager but probably concerned audience of my parents.

By the time we finished, I was literally covered in blood. My hair was sticky; it was all over my body and face. I had a shower, feeling very pleased with what we had done. Everyone thanked each other excitedly and, in a way, it was sad that the experience was over. However, we promised we’d work together again.

On the journey back to Braintree I mulled over my experiences. As I stared out of the train window, watching scenery disappear in the dark grey sky, I pondered on our obsession with watching people being gutted in various nasty ways. It’s an obsession that’s led people to assume that snuff films actually exist, even though there is no evidence to suggest that they do.

It’s something primal in each of us; whether we watch horror because we love the sensation of fear or because we find intestines hilarious, we need to see people in life-threatening situations on a regular basis. This need for fear or blood has spawned an entire genre of subgenres with the viewer relating either to the terrified protagonist or the thing that’s after them. My personal favourites are the subtle, spooky stories and I was glad I’d contributed to the horror genre in my own small way. It’s had its share of problems but it will always be one of my favourite things.