Australian artist Pip and Pop, aka Tanya Schultz, creates installations and artworks out of candy (sweeties), plastic and all kinds of bits and bobs. Just one look at a piece by her is enough to melt both your eyes and half your nose. It’s worth it though.

These pictures (and video) are what happened when she collaborated with fashion label Romance Was Born in 2013 for the Mercedes-Benz Fashion Week, Australia: 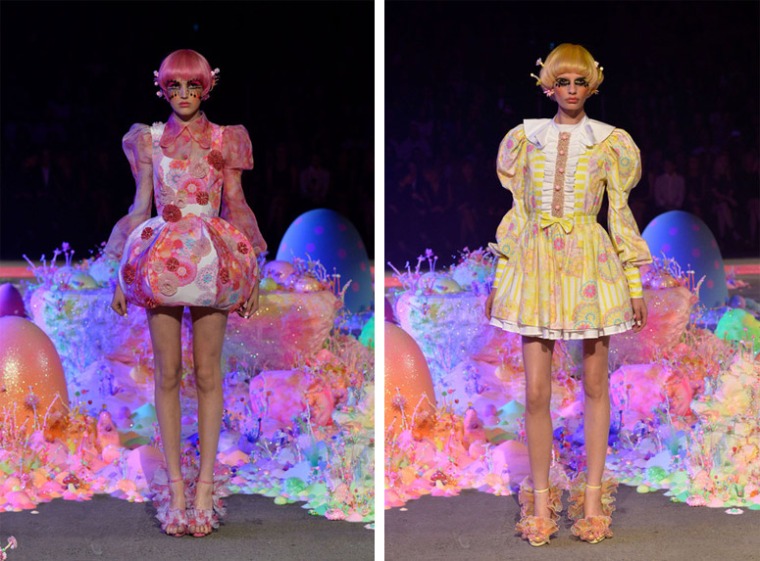 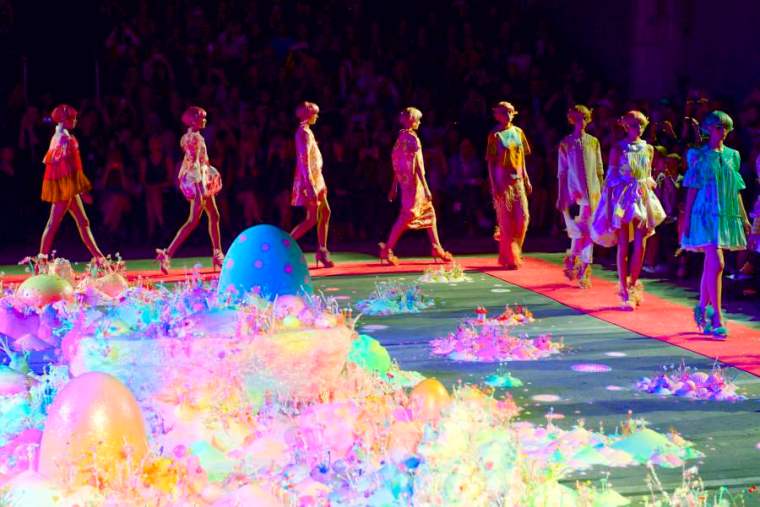 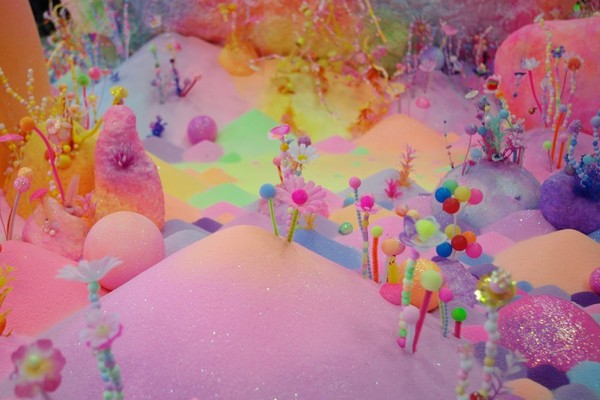 A friend of mine posted a link to some seriously bizarre shoes the other day. I think I would genuinely wear some of them, the unicorn heel is most intriguing… 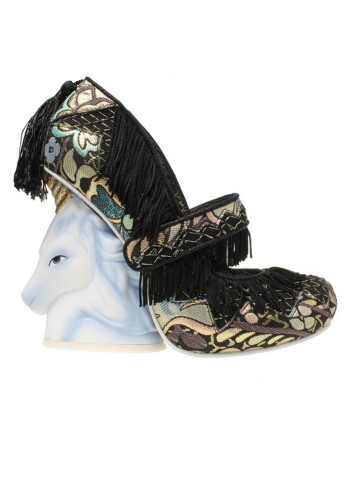 Alongside ‘regular’ stories I also write rude ones, and here’s another of them. Sugar Cravings is about an eternally youthful witch in a gingerbread bread house who sometimes gets lonely. Read it here.

On her Model Mayhem page she says: “I’m always looking for these textures, finishes and effects that transform my models. I innovate with different materials compatible with use on the skin. In this way, latex, gold leaf, gelatin, photo transfer and makeup, characterized my work and allow me to convey my creativity on the epidermis…I give as much attention to the composition and details. I am looking for all these features to achieve a true transmutation of the body, then breathes life into my painting and my art who turns into true living canvas.”

Witness the creation of a ‘cristal punk:’ 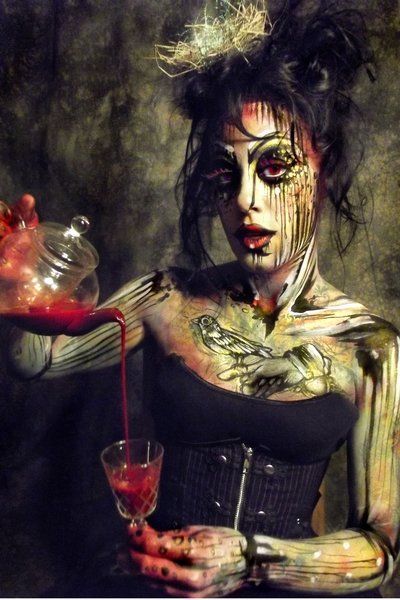 Have a look through the crazy editorial pictures of Tim Walker, they’re great! 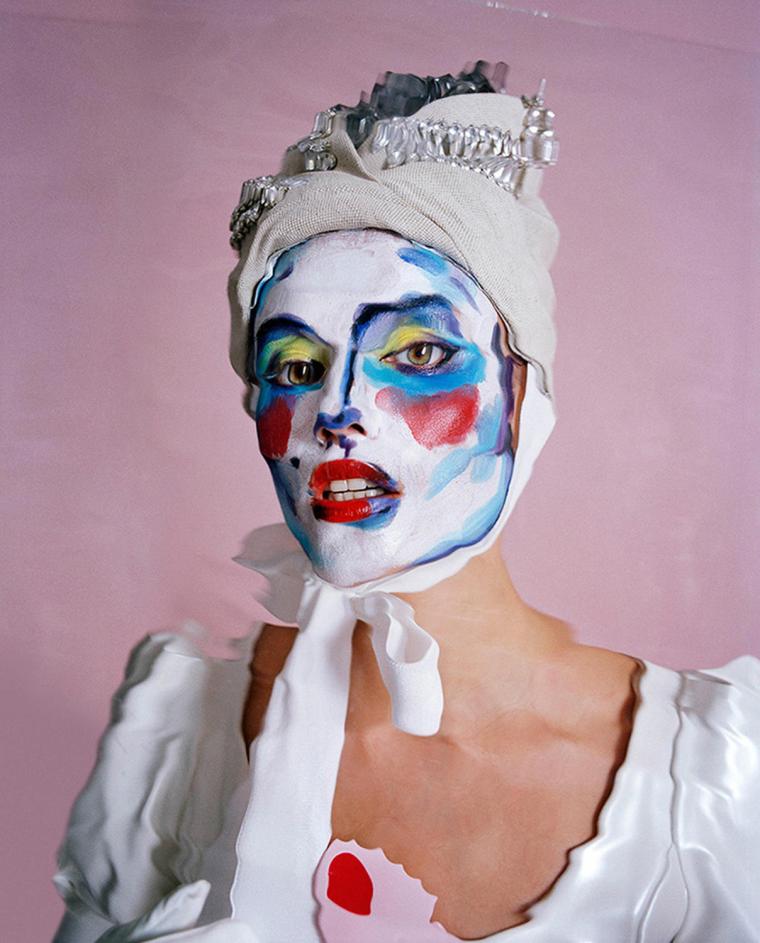 OK so most of the books featured in Bizarre Book Club shouldn’t be read by children, but it probably goes double for the ones featured here as parents don’t like their kids reading about full on rudeness or icky bits. I can understand it, that would be weird.

1. Wetlands by Charlotte Roche. This book is famous apparently, or rather infamous. Some say it’s feminist writing, others that it touches on mental illness. Whether it’s both, one or neither it did fascinate me and raised some interesting questions on our obsession with hygiene, especially feminine.

I agree with whoever said the anger was similar to JD Salinger’s Catcher in the Rye, and I also agree with the South Park episode in which they write a book called Scrotie Mcboogerballs. It is relentlessly and childishly disgusting and I rolled my eyes at several points, but I can’t pretend I didn’t read it very quickly.

2. House of Holes by Nicholson Baker. I dipped into this book rather than reading it straight through. I found it quite entertaining (and very daft) but wished it was even more surreal. I felt (and this is only personal opinion) that as it was in another world it could have been a lot more ‘out there.’

It’s set in a fantastical sexual holiday camp in which people can remove limbs or get friendly with trees, which was quite fun, however as it’s written by a man it’s very male focused. The descriptions for parts are quite amusing, but I won’t spoil it for you (I know I’m a tease).

3. The Juliette Society by Sasha Grey. I’m a fan of Sasha Grey, I think she’s an interesting lady. I enjoyed her novel despite the story line being a familiar one (a mysterious high society sex club). She mentions inspiration from Bunuel (Belle De Jour) and Kubrick among others and a lot of the fantasies, particularly one about a wardrobe, are very Lynchian. The title also comes from De Sade’s Juliette. I say stop worrying about where the story is going and just read it, it’s pretty.

I finished writing my book today, what joy! Perhaps I will start a cult and murder my followers as celebration. Or convince them to insert bread rolls somewhere unpleasant.

Anyway…I would like to share this post of art by Scottish lady Rachel Maclean. I watched her short films and there is something revoltingly wonderful about the phantasmagoria. Enjoy!

Have a look at this blog post on Pretty Awful Things, it’s apparently a joke recipe for an April Fool’s Day by a famous Medieval chef but we know better, don’t we? I imagine he kept this and his boiled goblins in the back for special occasions. Could be a good idea for Christmas dinner?

Two posts in one day?! Has my cold driven me to the brink of madness? Yes, yes it has.

Have a look at this post and run naked through the streets, proclaiming the aliens have landed.

It occured to me the other day how nature remains beautiful even when it’s being downright disgusting or bizarre, and I would like to honour that achievement.

So, today we shall look at the inspiration behind many people’s art: the Weirdness of Nature.

First let’s ease you in gently with some cute kitties on catnip, taken from BBC series Weird Nature:

Second is a series I find quite amusing (and very odd), Sacred Weeds. Shown back in the 90s, two test subjects take a natural hallucinogen (different in each episode) while men in suits ask questions and stare:

This is a rather sweet, inoffensive clip of mushrooms growing from the series Planet Earth (with some music added). I defy anyone not to chuckle at the willy shaped ones:

Back in March New South Wales, Australia was blighted by floods. The locals were evacuated and, desperate to escape the water, these spiders moved “onto higher ground” leaving an entire ghost town engulfed by webs. Story (and creepy pictures) here.

Next up I saw a lot of fairly grim things during the BBC series Life in the Undergrowth (creepy crawlies), but for some reason this made me go all funny:

And these leaopard slugs are beautiful (in a slightly grim, surreal way):

Anything deep sea is like visiting a hostile alien planet (just watch the BBC’s The Blue Planet). In the meantime here’s a little vid with some music:

I’d have loved to find a clip of vampire bats, particularly from the documentary that shows one creeping up on a pig. Unfortunately there isn’t one on youtube that doesn’t have a hokey American voiceover and I just can’t bring myself to do it. So you have to imagine it instead, which is probably good for you.

Penultimately have a look at series The Future Is Wild, where scientists hypothesise in a Walking With Dinosaurs kind of way on the direction the animal kingdom might go millions of years after we’ve disappeared.

Lastly is the one I find most amazing. It has all the elements: it’s beautiful, it’s disturbing, it’s insidious, it’s science fiction in the natural world; the cordyceps fungus, as shown on Planet Earth: